The pilgrims of Camiño Miñoto will receive the Compostela

El Camiño Miñoto is closer than ever to getting the official recognition. Thus, the pilgrims who take this route, which runs from the Portuguese city of Braga to Santiago, are already entitled to the Compostela since last March 28. The Church has recognized this Way, although, like the local government, their official confirmation is still pending. The right to the Compostela is a consequence of the abundant historical documentation that confirms the passage of pilgrims through the different municipalities on the route, and which has been recognised by various associations, including the entity that brings together the mayors of 17 municipalities involved (the Camiño Miñoto-Ribeiro Association), which seek this recognition.

Among the associations is the so-called Codeseda Viva, which has sent two dossiers with extensive historical documentation to the Autonomous Administration, along with a guide of the route translated into Galician, Portuguese, Spanish, Italian and English and will soon be available in French, translated by a neighbor from Alvite (Beariz), Carlos Roo. This organisation, from A Estrada, through the debragaasantiago.com website provides information to pilgrims about everything they need to know to complete the Camiño Miñoto.

During these last days, a group of eight walkers, from the Azores, in addition to two couples, one from Potugal and another one from Italy, have stopped in Pazos de Arenteiro to spend a night. Like many other pilgrims they have left their mark in places like Beariz or Cortegada, where the mayor Avelino de Francisco, who is also the president of the Camiño Miñoto-Ribeiro association, made up of the municipalities, said that “yesterday (on Thursday) 20 Portuguese passed through Cortegada." Only with the support of Codeseda Viva, 100 people took this route in 2017, which doubled in 2018 with a total of 200.

Avelino de Francisco declared that at the beginning of May they expect to have the perimeter study that the Camiño Miñoto-Ribeiro Association has commissioned to a company with a view to first obtaining recognition as an Itinerary of Cultural Interest, and continuing the process of validating it as an official Jacobean route. 'It is very important for it to be recognised as a cultural route,' he said.

The Galician municipalities that form part of the Camiño Miñoto-Ribeiro Association, and through which this route runs, are: Lobios, Entrimo, Padrenda, Pontedeva, Cortegada, Arnoia, Ribadavia, Castrelo de Miño, Beade, Leiro, Carballiño, Boborás, Beariz, Forcarei, Vedra, A Estrada and Boqueixón. Although associations and mayors agree on the main route of Camiño Miñoto, there are some discrepancies as to the exact course, as is the case of Codeseda Viva, which in its guide leaves the municipalities of Carballiño and Castrelo de Miño off the route, because it considers that they are an unnecessary diversion.

The Camino, which begins in Braga, and goes through Portugal until the Galician stage begins in Lobios, is approximately 240 kilometers long and on average takes about 10 days. The official recognition by the Xunta de Galicia would imply the full conditioning of the route, which in some sections is quite deteriorated and difficult for pilgrims to access. Meanwhile, the president of Camiño Miñoto-Ribeiro, Avelino de Francisco, confirmed that a vast majority of the 17 municipalities that are part of the Galician stage have already been preparing the way which crosses their territory. 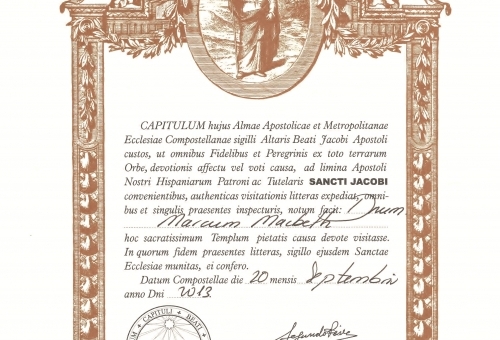