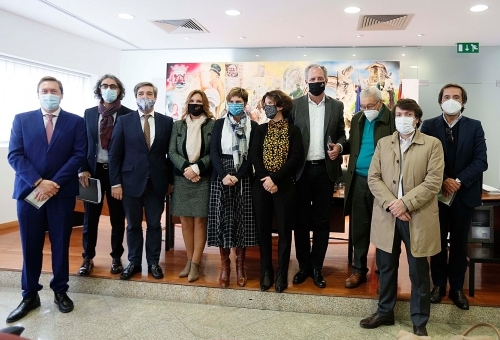 The municipalities of the neighboring country, between Braga and Monçao, undertake to investigate and document the layout in their territory

Portugal and Galicia joined forces yesterday to relaunch the Jacobean option of the Miñoto Ribeiro path, a project that in the Galician part already has extensive scientific-historical research that is currently evaluating the General Directorate of Heritage of the Ministry of Culture, which has to approve the declaration of the route as a cultural route, a step prior to its approval as a new Camino de Santiago.

This is the reason that led the Portuguese Secretary of State for Tourism, Rita Marques, and the General Director of Tourism of the Xunta, Nava Castro, to Melgaço, where they attended the signing of the protocol of the consortium made up of the municipalities of Braga, Vila Verde, Arcos de Valdevez, Ponte da Barca, Monçao and Melgaço, affected by the historical itinerary. The six municipalities are committed to developing the works to define the route as a Rota of Intermunicipal Historical and Cultural Interest called Caminho Minhoto Ribeiro.

The meeting was attended by Cástor Pérez Casal, a historian who, together with José Ramón Estévez Pérez, has been documenting the route for more than twenty years, and who also encouraged the councils involved to collaborate to carry out the project. Pérez Casal will now lead the scientific group of Portuguese studies that will set the route in detail between Braga and Melgaço and that will be made up of technicians from the six municipalities.